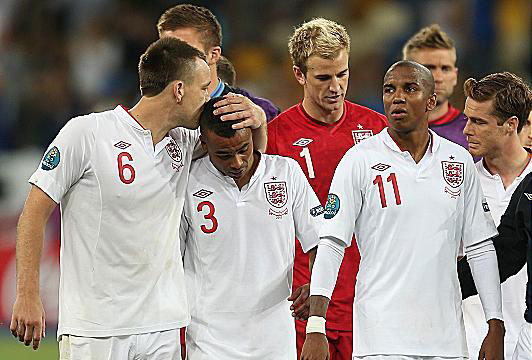 PAYING THE PENALTY ... England's players are distraught after shootout exit

SunSport asked Joachim Low why it was that England usually end up going home before his Germans in major tournaments.

And, as Low prepared for his side’s Euro 2012 semi-final against England’s conquerors Italy tonight, he argued that Roy Hodgson’s men are an improvement on Fabio Capello’s World Cup side.

Boss Low, who guided Germany to a 4-1 win over the Three Lions in South Africa, said: “The English were much better in this tournament than in 2010.

“When they played us then, they were a team who had a lot of problems. They were a very well organised team in this competition.

“Roy Hodgson has brought order into the side and has done a great job.