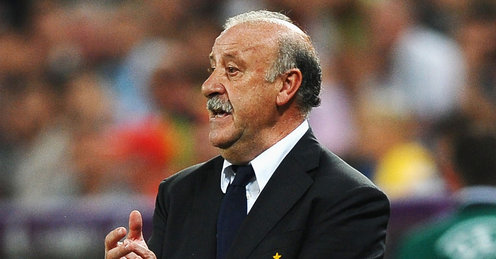 Vicente del Bosque: Has no new injury problems ahead of the semi-final

Paulo Bento believes patience is key if his Portugal side are going to find a way past the holders and world champions in Donetsk.

"Of course there are going to be moments in the game when we can link up and go forward," he said in Tuesday's pre-game press conference.

"We want possession of the ball but we are playing against a team that has played better than all the other teams.

"It's going to be about patience. We know what we have to do. We have to put pressure on our opponents in the right areas of the pitch.

"Our aim is not to defend all the time. You can't do that against the world and European champions. We are aware that it's going to be difficult but they also know that we can cause them problems.

"It was very easy to get motivated because we're in the semi-finals. There can't be a more beautiful opportunity than the one we have tomorrow."

Real Zaragoza frontman Postiga has been ruled out with a thigh injury, meaning coach Bento will be unable to field the same starting line-up which he has used in the last six competitive matches.

Besiktas forward Hugo Almeida is expected to get the nod in Donetsk, with 20-year-old Nelson Oliveira, who has come on as a substitute three times in the tournament, likely to be on the bench again.

Almeida will be flanked in the Portuguese attack by Cristiano Ronaldo, whose glittering displays against the Netherlands and the Czechs played a decisive part in sending Portugal into the last four.

He has scored three goals in Portugal's last two games and is one goal from setting his country's all-time European Championship scoring record, at seven. He has never found the net against Spain in two previous competitive fixtures.

"We'll intend to throw him off his game, the best example of that is the second round win at the World Cup, where we managed the better result," said Del Bosque of a 1-0 win over Portugal in Johannesburg.

"The idea will be the same."

However, he must decide whether to start the game again without a recognised striker and allow Cesc Fabregas to fill the role.

If Del Bosque decides against the quarter-final line-up, Fernando Torres could lead the line, while Pedro could also get a start in the Spain midfield.

Spain has won its last six knockout round games at major tournaments by a combined score of 7-0.

Although the team is not providing eye-catching scorelines, it has shown patience and maturity to break down opponents who nearly always 'park the bus', or take a completely defensive approach.

"I would prefer if they play back in their own half, it's a satisfaction for us to keep possession," Del Bosque said of the Portuguese.

"They have enough players that can provide alternatives to their attack, but I would like it if they played in a defensive way because we have solutions to combat that."