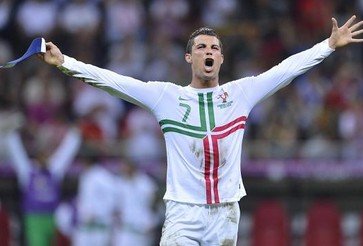 PORT TONIC ... Cristiano Ronaldo is tipped to stun Spain for Portugal in semi-finals

CRISTIANO RONALDO has vowed to lead Portugal to victory over Spain — and to their second Euro final in eight years.

The Real Madrid superstar also taunted the reigning champions after Spain complained Portugal have had two more days rest ahead of tomorrow’s semi-final.

“The Spaniards claimed having two fewer days is a disadvantage but, as a professional, I believe it’s not an important fact.”

The former Manchester United ace believes underdogs Portugal will dump the European Championship favourites out of the tournament.

Ronaldo famously cried on the pitch after hosts Portugal lost the Euro 2004 final to massive underdogs Greece in Lisbon eight years ago.

And he is desperate to wipe away those memories by reaching another final — and this time going home with the trophy.

He said: “I don’t feel pressure playing against Spain. These games are part of my life.

“I have spent 10 years playing these type of games for club and country and I have to be accustomed to it.

“I feel responsibility, yes. But pressure, no. It’s beautiful for Portugal to be able to reach another final, it will be difficult but we are only one step away.

“We have done great work to get here not only in the finals but also in the qualifiers.”

Spain boss Vicente Del Bosque (below)whinged after their quarter-final win over France on Saturday that the champions would have two fewer days of rest than Portugal.

But his main problem will be coping with Ronaldo, who has finally got into the groove after firing blanks against Germany and Denmark.

Ron netted both of Portugal’s goals in their 2-1 group stage win over Holland and then grabbed the quarter-final winner against the Czech Republic on Thursday with a diving header.

He added: “I knew the goals would come.

“I didn’t start well but with the help of my team-mates everything got better.”

Ronaldo has 35 goals in 94 matches for Portugal but admits that beating Spain is one of his biggest challenges.

He said: “It will be a tough battle and we will have to play brilliantly to win.”