Les Bleus boss to discuss his role with FFF president 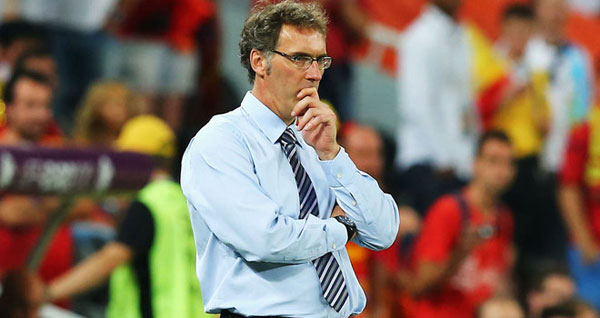 Laurent Blanc: Has spent two years in charge of the French national side

France coach Laurent Blanc, who has been linked with the vacant managerial post at Tottenham, is due to meet with French Football Federation (FFF) bosses to discuss his future.

Blanc has been in charge of the French national side since 2010, when he inherited the reins on the back of a shambolic showing at that summer's World Cup.

He has helped to turn Les Bleus' fortunes around and led them on an impressive unbeaten run heading into Euro 2012.

They were, however, cut down to size by reigning European champions Spain in the quarter-finals on Saturday, with stories of in-fighting and post-match media blasts doing the rounds.

It is uncertain whether Blanc will now accept the challenge of guiding France towards the 2014 World Cup.
Career

He had been keen to extend his contract in the build up to Euro 2012, but he is now being linked with domestic coaching roles - including the one at White Hart Lane, where Spurs are searching for a successor to Harry Redknapp.

FFF president Noel le Graet claims Blanc's future has not been a topic of discussion for the French authorities as yet, but he is expecting talks to be held soon with the 46-year-old World Cup winner.

"We promised not to talk about this during the Euros.

"We will meet soon to discuss the future. We must give it a week to take stock at leisure. We will meet within eight days and we will have a position, I imagine, in common.

"As a man, Laurent is completely respectable and pleasant. We must talk about football, his desire and his career. We must see how he sees things and how I see them."

Le Graet considers France's showing at Euro 2012 to be 'acceptable' and admits that they remain a work in progress.

He said: "We have made progress. We are 16th in the FIFA rankings and we ended up in the last eight of the European Championship. That was our goal, and it was realised.

"But to imagine that our team is the best, it's not a good analysis. Our current staff cannot be champions of Europe. I wish to go further but we must be realistic.

"There are gaps. There have been real developments but the road is still long to become a team that others fear."

He added: "We had not won a game in international competition since 2006. I try to find positive things - that is my role. We are in a period of transition. Obviously, I would like it to go faster."