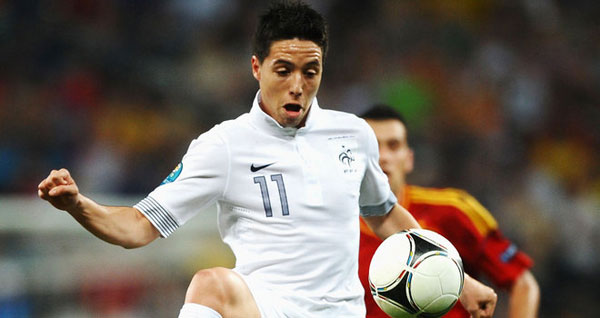 The Manchester City midfielder, who has taken issue with the press in the past, clashed with a reporter after Les Bleus were beaten 2-0 by reigning European champions Spain on Saturday.

FFF president Noel le Graet admits the fiery 24-year-old must learn to keep his emotions in check and assert more self-control when faced with similar situations in the future.

He told RMC: "I will ask the journalist to meet with me, but this is intolerable.

"I understand that there are negative reactions. Samir is on the edge, he wants to do well, but he cannot control his impulses."

Nasri has endured a tense relationship with the French media in recent times and aimed his goal celebration in their direction after netting against England in Les Bleus' opening game of Euro 2012.

Blanc appreciates that there is an underlying issue which needs to be addressed, but admits that Nasri's actions cannot be condoned.

"It's a lack of respect toward the journalist," he told Telefoot.

"I told (Nasri) what I thought of it and what I would have done in his place. It's very unfortunate.

"There is a problem between Nasri and the press. That's the truth.

"The comments are very violent and it's been proven that they were said."