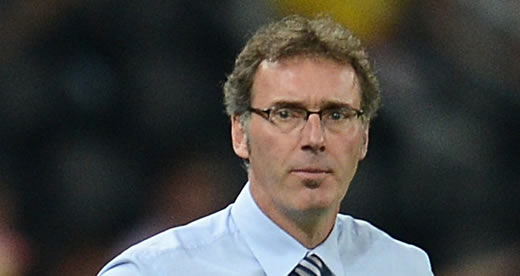 Laurent Blanc: Believes Spain were there for the taking but admits there was something missing from his France side

Laurent Blanc admits there was "something missing" from his France team after their 2-0 quarter-final defeat to Spain in Donetsk.

A first-half header from Xabi Alonso gave Spain the lead and they held it fairly comfortable before the same player added a second from the spot in injury time.

France struggled to create chances throughout but Vicente del Bosque's side were far from their fluent best.

And that's something Blanc believes his team deserve credit for even if he admits their performance did not warrant a place in the semi-finals.

"When you lose a game there's always something missing, I'm not sure if it's possession or technical ability," he said.

"The lads gave everything and it's very hard to play against Spain. We blocked their left flank, which is their strong point."

Blanc's only frustration was that France failed to ask the questions of the world and European champions that could have seen them pull off an upset.

"They were there for the taking," he added.

"We knew we would get some chances, and the only thing I regret is that they scored off their first good chance.

"If we had gone in level at 0-0 at half-time, then I think we would have had more room in the second half.

"The big teams have all showed up at this Euro, and they will be in the semi-finals. Unfortunately, France won't be."