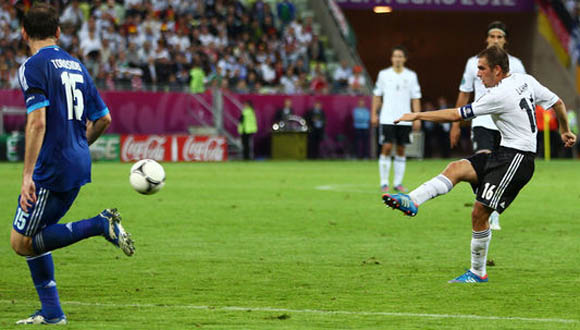 Germany eased ominously into the semi-finals of Euro 2012 - where they will meet either England or Italy - with a 4-2 win over Greece at the Gdansk Arena on Friday.

Having set out to frustrate from the off, once they fell behind to Philipp Lahm's goal just before half-time the 2004 champions were always up against it.

Having equalised somewhat unexpectedly through Celtic forward Giorgios Samaras they could not hold on for very long, and goals from Sami Khedira, Miroslav Klose and Marco Reus merely reflected the dominance of the three-time winners of this tournament before Dimitris Salpingidis' late penalty.

On the four previous occasions Germany have won a last-eight encounter they have reached the final, and this performance increased the likelihood of them making it five.

For a long time in the first half it appeared they might regret a number of missed chances, but once Lahm broke the deadlock there was only going to be one winner.

Greece, who have now have never beaten their opponents in nine competitive matches, scrambled, scampered and blocked their way towards half-time only for the Germany captain to fire home a swerving effort from outside the penalty area six minutes before the break.

It allowed coach Joachim Low to breathe a little easier after making four changes from the side which beat Denmark, the most notable being handing Klose his 120th cap at the expense of three-goal Mario Gomez.

After the Lazio striker had an early effort ruled out for offside, when Michalis Sifakis had fumbled Khedira's shot, Germany laid siege to Greece's goal.

Excellent movement and passing had the Greeks manning a determined rearguard effort, but even when that was breached Mesut Ozil shot weakly at Sifakis after being set up by the impressive Reus, who had already sliced one shot wide.

Klose failed to get on the end of Reus' cross-shot and Khedira had Sifakis scrambling with another shot before Lahm made the 39th-minute breakthrough, the left-back cutting in from an advanced position to smash in a swerving shot.

The advantage should have been much greater, however, and Germany were made to pay 10 minutes after the break when out of nowhere Greece equalised.

Substitute Theofanis Gekas released Salpingidis on a quick break down the right, and when he slid over a teasing cross Samaras poked home at the far post.

They were level for only six minutes, though, as Khedira, Germany's supposed defensive linchpin in midfield, timed his run from deep perfectly to volley home from Jerome Boateng's assist.

Klose ensured the Greeks could not produce another 2004 upset when he powered home a header from Ozil's free-kick as Sifakis came but got nowhere near the cross, and Reus lashed in a volley off the underside of the crossbar after Klose's shot rebounded off the goalkeeper.

Salpingidis converted a late penalty, generously awarded for Boateng's handball, but it was little consolation.