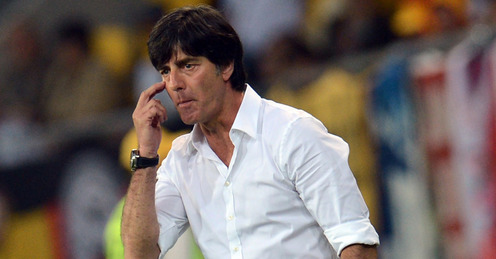 Euro 2012 favourites Germany take on rank outsiders Greece in their quarter-final in Gdansk on Friday - with both teams comfortable in their respective roles.

Greece provided arguably the biggest shock of Euro 2012 so far by jumping from the foot of Group A to second with a 1-0 win over Russia in their final group game.

And their unexpected title triumph at Euro 2004 is another indication of how dangerous the Greeks can be.

Greece coach Fernando Santos believes the example of eight years ago is giving his squad belief as they enter the knockout stages.

"I would like to seize this opportunity to say what an inspiration for us the 2004 success is," said Santos.

"We showed great resolution and strength and we were written off before that tournament, but we still reached the final and won the cup. That should be a source of inspiration for us this time."

It may need more than inspiration if they are to beat Joachim Low's team.

Germany are the only team at Euro 2012 to win all their matches so far - even also winning all 10 qualifying games.

Although Low is not taking Greece for granted, he remains convinced his team will progress to the semi-finals.

"Logically we are favourites, but we can deal with that," he said.

"But remember - knockout games have their own character so it will not be the case that the favourite automatically reaches the next round.

"We saw that in the group when Russia were the big favourites and we have all seen what happened.

"But if we show all of our inner strength and belief, then we are strong enough to beat the Greeks of course.

"I am convinced we will win."

Germany welcome Jerome Boateng back after he missed the 2-1 win over Denmark due to suspension.

Lars Bender should therefore return to the bench despite scoring the winner against the Danes.

The rest of the team is expected to be the same, meaning the likes of Miroslav Klose and Toni Kroos must continue to wait for a start.

Santos must do without skipper Giorgos Karagounis and left-back Jose Holebas, who were both suspended in the win over Russia.

Georgios Tzavelas had already usurped Holebas in the left-back slot so will continue, but the likes of Sotiris Ninis, Grigoris Makos and Giorgos Fotakis will battle for Karagounis' midfield berth.