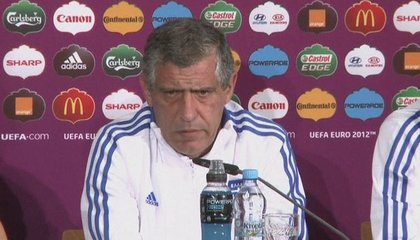 Fernando Santos has admitted that playing Germany in the quarter-finals of Euro 2012 is a source of "extra motivation" for his Greece side, due to the current political tension between the two countries.

The Greek nation is currently in the midst of an economic crisis and there is a lot of resentment towards Germany, who are fronting the country's proposed bailout.

Santos freely admits that the political situation is playing on the minds of everybody involved in Friday night's clash in Gdansk, but he wants his players to focus on the task at hand.

"Greece fans will be thinking about it and so will the Germans," Santos admitted to CNN International.

"As far as the players are concerned, they can have extra motivation and more passion in this game against Germany, but they can't lose focus.

"But we need to think clearly during this game, and if we are led just by our hearts and our emotions, we will be in trouble."

Santos admitted, though, that his squad are struggling to come to terms with the effects of the recession that has rocked their homeland.

"Look, the situation has affected us," he conceded. "The players have family, they have friends, and they worry about what is going on.

"I would say Greece is going through more than just a political or economic crisis. There is a social crisis, with a lot of unemployment. The players are human beings and they feel that.

"What I have asked them to do is to try to forget about that when they play and to focus just on football to show they are real fighters."

Greece's last-eight encounter with Germany will get under way at 20:45CET.