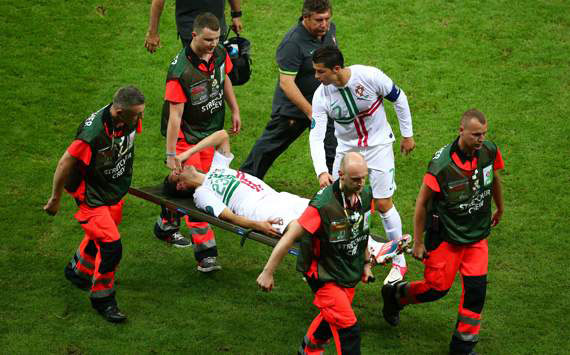 Portugal centre-forward Helder Postiga is set to miss the Euro 2012 semi-final clash with either Spain or France in Donetsk, after suffering a suspected hamstring strain in Thursday's 1-0 quarter-final win over Czech Republic.

The veteran striker, who was an integral part of Luiz Felipe Scolari's side that reached the 2004 final, was replaced by Hugo Almeida shortly before the interval at the National Stadium in Warsaw.

Team doctor Henrique Jones confirmed he looks doubtful for the showdown on June 27.

"We are going to evaluate the extent of the injury more closely tomorrow [Friday]," he told reporters.

"But even if it is not a serious one it looks inevitable he will be out of contention for the semi-finals.

"We are going to do all we can to ensure we get him back for the final," he added, assuming Paulo Bento's side can overcome the current world and European champions, Spain, or Laurent Blanc's French side.