Nani said Portugal's quality and desire won through in the end against the Czech Republic, allowing him and João Moutinho to really start dreaming of UEFA EURO 2012 glory. 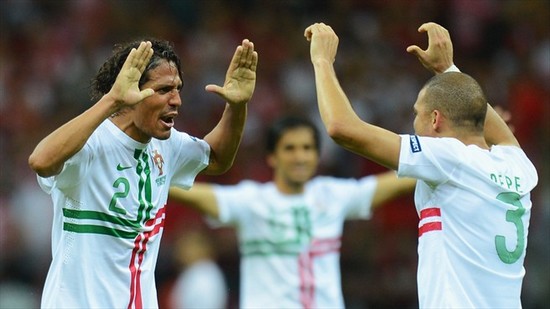 João Moutinho and Nani are already looking ahead to a UEFA EURO 2012 semi-final against either Spain or France next Wednesday in Donetsk after Cristiano Ronaldo's 79th-minute header earned Portugal victory over the Czech Republic. The emphasised the importance of rest and recuperation, or taking it step by step; but neither could resisted looking a little further ahead, to the 1 July showpiece in Kyiv.

We knew it was going to be a very difficult match. We said it before kick-off, that this was a game against an excellent team, a team that knew Portugal's strengths. They tried to play on the counterattack, on our errors, but we managed to control the match in our own way in order to create opportunities. We managed to score a goal, which was enough to secure passage to the semi-finals.

The ambition now, having gone through to the semi-finals, is to win [the tournament].
Portugal go into every match with the will to win; that's all we think about. Now we're going to rest, we've got several days to restore our strength. We'll have all our energy for the semi-finals so that we can reach another final, which would be very important both for Portugal and for us personally.

We had to struggle a bit, as we are in a phase of the tournament where the matches are all very difficult, where our opponents are strong. The will to win shone through, and our quality, and we were already superior before we scored. It ended with a good result but in the beginning we struggled a bit. We have to take it step by step, as we have done up until now. Now we need to think about the match in the semi-finals. And if we win that...