The Inter playmaker was left disappointed by his nation's early exit from the tournament, and pointed the finger of blame firmly at themselves 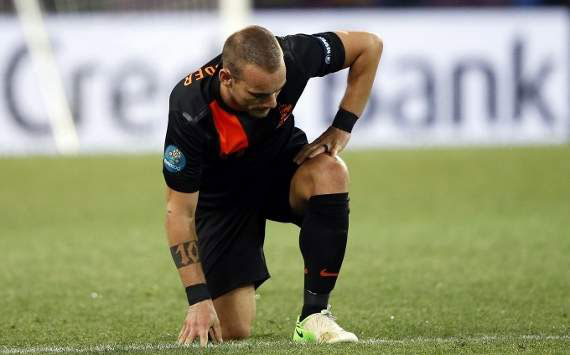 Wesley Sneijder has been critical of the dismal efforts of his Netherlands compatriots at Euro 2012, suggesting that an overhaul of the squad is a necessity failing to pick up a point in Poland and Ukraine.

The Oranje entered the tournament as one of the favourites, but three losses on the trot – to Denmark, Germany and Spain - in the group stage saw them finish bottom of Group B.

"You can't go on after a tournament like this. This was the last chance of this generation," Sneijder told Voetbal International.
"With this group we had to win something, but we didn't."

"Two years after the World Cup final [in South Africa] we can't even reach the quarter-finals here, and only have ourselves to blame for this disgrace.

"I think the changes that need to be made will be made. I'm not sure what the level of the next generation is, but I don't think the Under-23s will be the answer though. They are not ready for it."

The Oranje were let down by sub-par performances from the likes of key men Robin van Persie and Arjen Robben, while rumours of disharmony between ranks with rife throughout their brief appearance, with head coach Bert van Marwijk’s job also no under scrutiny.