Arjen Robben and Rafael van der Vaart laid the blame of Holland's disastrous Euro 2012 campaign firmly at the door of the players - and not under-fire boss Bert van Marwijk.

The Dutch, who reached the World Cup final two years ago, lost to Denmark, Germany and Portugal to finish bottom of Group B.

With allegations of divisions swirling through the Dutch camp, a furious 28-year-old Robben would only say: 'Those problems inside the camp have to stay in the dressing room. I don’t want to really talk about it. 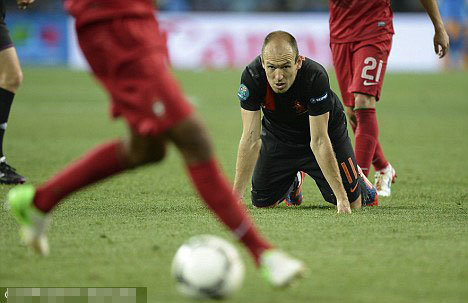 Down and out: Arjen Robben

'I would prefer to get on a bus right now but I am here in front of a camera because it is part of the job.’

'We have failed with the entire squad. It is time to look in the mirror with all the players. We must all do that. Individually we should look in the mirror and as a team. We have been knocked out in a major tournament with three defeats and that is the stone hard truth. It was a disastrous campaign.'

And Van der Vaart, who hit the stunning opener in the 2-1 defeat to Portugal added: 'Holland was poor. The conclusion of this tournament has to be hard and we were bad.