Hello Cristiano Ronaldo, goodbye Holland: the Ego has landed at Euro 2012 and out crash ‘Egoland’.

It is unlikely to provide Bert van Marwijk with any comfort but he was probably right all along and his attempt to cram so many creative forces into one team merely produced an invitation Ronaldo was unable to resist.

Five days after misfiring against Denmark in Lviv, Portugal’s captain ran amok against a Dutch side who seemed neither to know nor care about how they might contain him.

Ronaldo scored a goal in each half and hit the post twice as Portugal came from behind to clinch a  quarter-final clash against the Czech Republic in Warsaw. 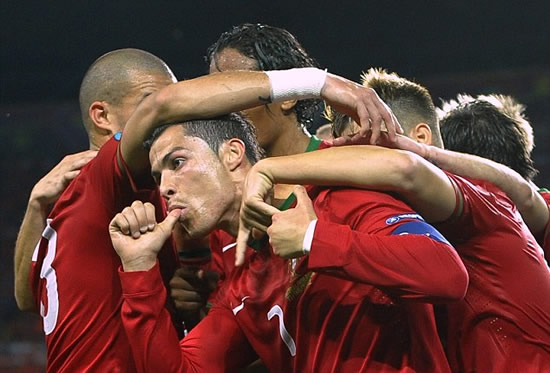 The main man: Ronaldo inspired Portugal to a place in the last eight 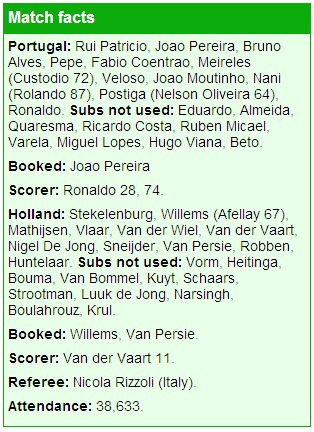 Holland leave for home without a point and seemingly undone by their old tendency to self-destruct.

Van Marwijk may have found a way to harmonise factions in the camp in South Africa, where they reached the World Cup final, but they lurched out of control here.

After losing their opener to Denmark last week, one Dutch newspaper produced the headline: ‘Legoland 1 Egoland 0’. And here, aware nothing less than a two-goal win would be enough, Van Marwijk bowed to popular demand and risked a row with his daughter on Father’s Day by dropping her husband, Mark van Bommel.

Into midfield came Rafael van der Vaart, winning his 99th cap and starting for the first time in the finals. Klaas-Jan Huntelaar led the line, which meant Robin van Persie dropped deeper and Wesley Sneijder shifted on to the left.

With two attacking full backs, it was a high-risk strategy against a Portugal team designed to counter-attack but it started well when Van der Vaart struck after 11 minutes.

Arjen Robben’s pace yanked Portugal’s back-line out of shape and created a pocket of space for Van der Vaart to collect a pass, open his body and curl a left-footer into the far corner from 20 yards.