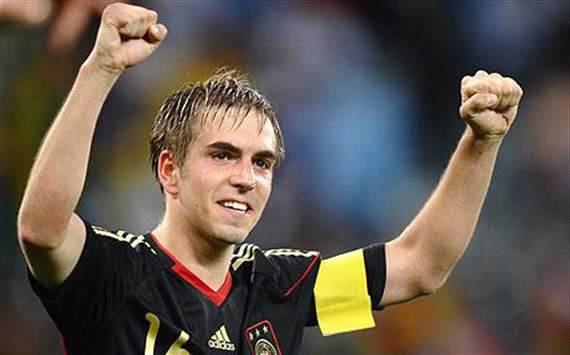 Philipp Lahm has hailed Mario Gomez as "world class" after the striker hit a double against the Netherlands to put Germany on the brink of qualification for the Euro 2012 knockout stages.

Two first-half goals from Gomez put the Germans in command, before Robin van Persie struck after the break to give Bert van Marwijk's team hope. Their late surge proved fruitless thereafter, however, as Joachim Low's side held on to take all three points.

The win leaves Germany needing just a point from their final first round game with Denmark to clinch top spot in Group B and qualification for the quarter-finals.

"The tournament isn't over yet and Mario still has a lot to contribute," Lahm told ZDF. "He is a top striker, that we know.  The goals he scored today were world class."

Lahm's defensive accomplice Jerome Boateng played a key role in killing off any hopes of a Dutch comeback and was pleased with Germany's overall performance in a game that was played in challenging temperatures in Kharkiv.

"We stood well defensively," Boateng said. "After half time we didn't do enough for the game. But luckily we succeeded in holding on to the result until full time.

"I'm tired after playing in these temperatures. It was an exhausting match."

The Bayern Munich defender also voiced his displeasure at receiving a yellow card during the match, but stressed that the result was all that mattered.

"It was a stupid yellow," Boateng added. "Can - and do you have to - give these? I don't know. Most important is that we won."