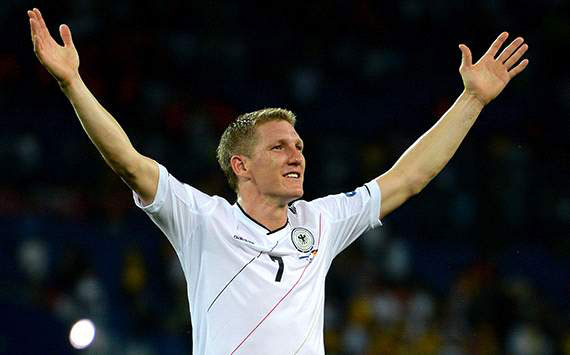 Germany coach Joachim Low has acclaimed the growing influence of midfielder Bastian Schweinsteiger after his side's 2-1 win over the Netherlands.

Schweinsteiger was the creator of both of Mario Gomez's goals for Germany as Low's men edged to victory despite a rousing second half performance from their Dutch counterparts.

Low was especially pleased with Schweinsteiger's display and believes the midfielder can have a big role to play if the Germans are to progress further in the tournament.

"Bastian Schweinsteiger is getting better with every game and is growing in influence," the coach told ZDF. "He is strong and wins a lot of duels.

"Winning the group is important so we can stay in Danzig which would help us in the quarter final."

While Low praised Schweinsteiger's individual showing, he was keen to stress the importance of a strong team performance in challenging temperatures in Kharkiv.

"I had a feeling that in the 60th minute Netherlands were out of energy," he revealed. "The temperatures were extreme. The game was competitive and intense.

"There were phases in the game in which both teams lacked the right dynamic. We wanted to take the second step today at all costs so it was important to perform well."