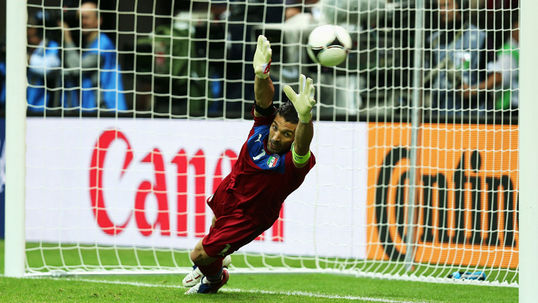 Spanish goalkeeper Iker Casillas has spoken of his huge admiration for his Italian counterpart Gianluigi Buffon.

Both men will captain their respective countries in Sunday's Euro 2012 final in Kiev and Casillas is expecting a close encounter similar to the 1-1 draw between the two in their opening game of the tournament.

"Buffon has my admiration and maximum respect," he told Onda Madrid.

"He is an exceptional goalkeeper and at 34 is still amongst the best. For goalkeepers that are a little younger than him he has been a reference, he has driven us and we wanted to be like him. We have a good relationship and every time we meet it is a pleasure.

"At the end we will return to face the team we opened the tournament against. The opponent didn't matter to me because Germany, like Italy, appeared very good, each one with their own style of football. Italy is a dangerous rival that will make it difficult for us."

The Real Madrid captain also insisted Spain are motivated solely by victory, even though a draw against Croatia in the final group game would have sent Italy home.

"In no moment did we speculate about drawing 2-2. Our professionalism is like this. We wanted to win against Croatia, we had a moment in which they pushed and we could have been put out. Our objective was to win and those that have arrived here are honourable."

However, despite progressing to a historic third major final in a row, Spain have been criticised in many quarters for the lack of excitement in their play.

The world champions have not conceded in 420 minutes of play since Antonio Di Natale handed Italy the lead in their opening game and have even played the majority of the tournament without a natural striker but Casillas says he always expected this competition to be even tougher as reigning European and world champions.

"In every moment we have said that it was not going to be the same as the European Championships four years ago. We are the reference at a world level and we hope it lasts for a long time, but this is a cycle, another team will arrive and dominate the rest. We are the team to beat and they always talk about us. The important thing is we are in the final and we are going to try and defend our title from four years ago.

"A small, but the most important, step remains. For the team and the players we are in a wonderful era of Spanish football. We are in the final, it has not been as easy as we expected. After four years at the top of world football it is normal that the other teams face us in a different manner."