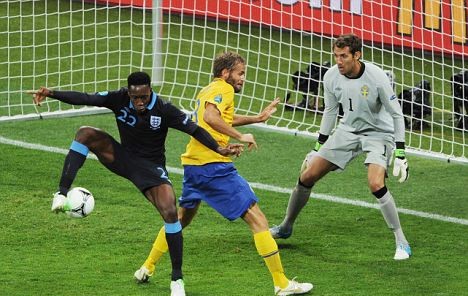 The way he connected with Theo Walcott's cross with his back to goal was sublime. If a South American had guided the ball into the net through his legs like that, we'd be purring about it. And it was an important goal as well, the winner in an exciting 3-2 victory.

My player and manager of the tournament are Italians - Andrea Pirlo and Cesare Prandelli. We should give him an award just for dealing with Mario Balotelli so well.

My favourite game? Germany's 4-2 win against Greece in the quarter-finals. At that stage, I thought my pre-tournament tip would go on to win it. But Pirlo, Prandelli and Balotelli rose to the occasion against them.

England will be watching on TV - and hurting

I hope the England players will find time to watch tonight's final - and I am sure they will, even though it will hurt them a lot having missed out themselves.

I remember going back to France after the 1998 World Cup to do some commentary work for ITV on the semi-final between Holland and Brazil. It was difficult, because our own exit was still so raw.

But 95 per cent of the England players will tune in from holiday or at home. I hope it whets their appetite to be in the final next time out.