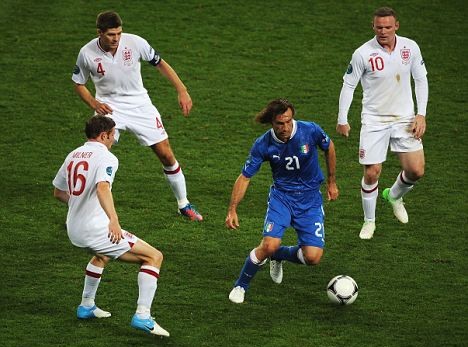 He uses a system where Pirlo can dictate and with forwards Mario Balotelli and Antonio
Cassano always on the move, they can cause Spain problems. Pirlo is 33 but in one of those periods sportsmen have when their confidence is so high, they are almost invincible.

Heart and mind together. England and Germany tried to shackle him and failed. Spain won't even try - they will play their own game. It means Pirlo might have the space to hurt them, you just hope age won't catch up with him right at the end of the tournament after five tough matches already.

It's a very tough final to call. The amazing thing is Spain haven't been at their best yet and they are still favourites. Portugal pressed them high up the pitch at times in the semi-final and that is what Italy must do. Then, at other stages of the game, the team can retreat - what I call a basketball halfway press. I've never thought Spain were certainties to win Euro 2012, but having conceded just one goal so far (to Italy in their opening group game), I just favour them to win a unique hat-trick of titles. I, for one, won't find it boring at all.

Eng land haven't come away from Euro 2012 empty-handed in my book. Despite the high-quality strikes on show in Poland and Ukraine, I think the goal of the tournament was scored by our own Danny Welbeck against Sweden.