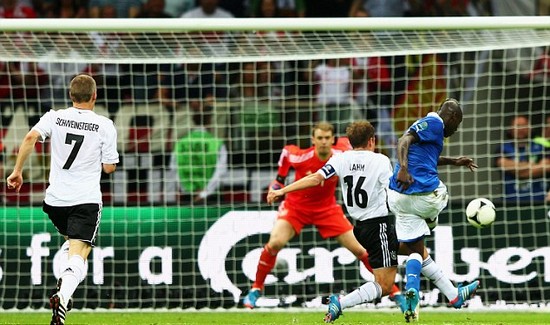 Firecracker finish: Balotelli holds off the attentions of Philipp Lahm to blast Italy into a two-goal lead, sparking a wild celebration from Gigi Buffon (below)

Now they must go one better if he is to prevent Manchester City team-mate David Silva guiding Spain towards history as the first team to win three successive tournaments.

'With Spain we are the two best teams in the tournament,' he said. 'Can we win? I'll tell you on Sunday!'

Balotelli also earned the praise of Italy manager Cesare Prandelli, who masterminded a famous win, which maintains the Azzurri's stranglehold on meetings with Germany.