Cesc Fabregas has hit out at the critics who labelled European champions Spain as boring.

The Spanish focus on possession football and closing their opponents out of the game has not been to everybody's taste but the World Cup winners turned on the style when it mattered in the final against Italy.

And Fabregas, who played in the 'false No 9' position in the 4-0 win in Kiev, believes his side delivered the perfect riposte. 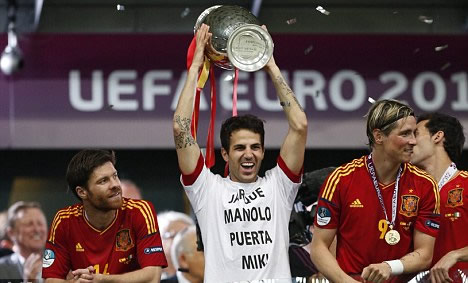 Asked if tonight's performance was an answer for their critics, the midfielder told Radio Five Live: 'I think so. Those people who think we are playing boring...in my opinion they don't understand the game.

'This feels really amazing, one of the best days of my life. I don't think we're ready to see what we have done. Three major trophies in a row has never been done before in the history of football.

'It's difficult to realise what we have done, but in time I think we will, It is amazing.'