Fernando Torres has won the Euro 2012 Golden Boot award after scoring his third goal against Italy in the final.

Spain, who ran out 4-0 winners, chose to start without a striker in the showpiece event in Kiev, with Cesc Fabregas playing in the 'false nine' position.

But Torres scored the champion's third goal to win the award despite finishing level with a host of players, courtesy of having one assist to his name. 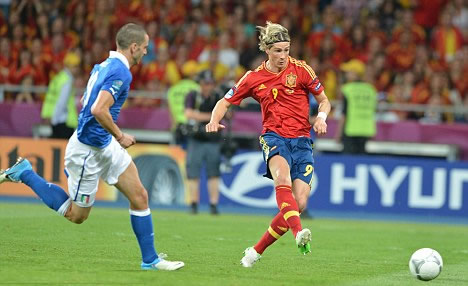 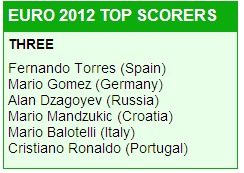 Torres only started one of Spain's five matches at the tournament, against Ireland, when he scored twice.

He was replaced by Fabregas, and later by Alvaro Negredo against Portugal as Spain experimented with their line-up.

In the final itself, Spain led 2-0 at the break thanks to goals from David Silva and Jordi Alba.

Italy's chances were all but over when Thiago Motta was stretchered off when the Azzurri had already made their three substitutions.

Torres, and Chelsea team-mate Juan Mata added gloss to the scoreline with late goals, the second of which was assisted by the Stamford Bridge striker.