The Spanish are puzzled. From being the team that everyone loved to laud, suddenly it is fashionable to deride their passing style - tiki-taka as it is known in Spain - as boring.

The question was put to Cesc Fabregas, who said: 'I find it a little bit strange. We're very proud of our style, of our idea of playing the game. It's the route that we have taken to be where we are now. We've no reason to doubt it.' 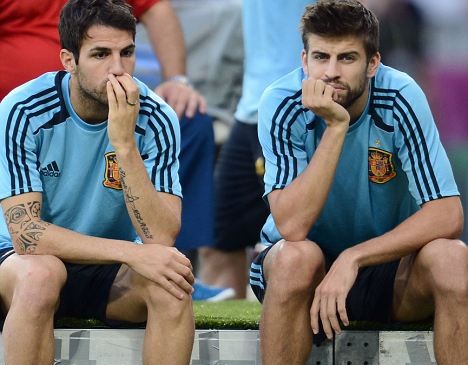 Not that anyone in the Spanish camp is pretending that these Euros have matched the excitement of their win in 2008 - or the levels of the World Cup victory in 2010.

Xavi, the personification of tiki-taka, acknowledged as much: 'It hasn't been easy and behind the scenes there are factors that no one sees. But we've seen that, for Spain, this is the right way to play and we have to keep going even when things don't go well.'

Indeed, there is reason Spain have not played with quite the same pace and panache that is associated with Barcelona, the team to which their style is related.

Those close to the Spanish camp report that the fitness tests conducted on the players when they arrived for pre-tournament training demonstrated they were in the worst physical shape ever.

Unsurprising for Barcelona players who, as well as taking in a trans-continental World Club Cup in Japan in December and so missed a significant winter break, also played a Copa del Rey final on May 25, six days after the Champions League final and just 16 days before the first Euro 2012 match.