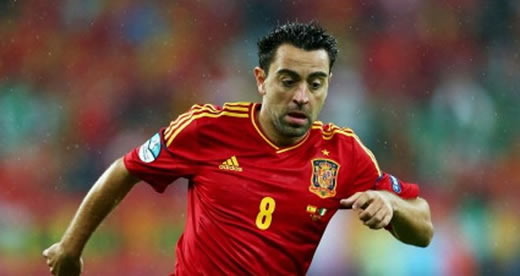 Xavi: Spain playmaker has rejected suggestions that the European champions have become boring

Spain playmaker Xavi has brushed aside the suggestion that the reigning European champions and World Cup holders have become boring.

Their tiki-taka style thrilled supporters as they were crowned kings of Europe in 2008 and also at the World Cup in South Africa.

Now it has taken them to the brink of history as the only side to win three major international tournaments on the trot, but it seems their approach is no longer revered as it once was.

With David Villa ruled out through injury and Fernando Torres still not back to his best, Spain coach Vicente del Bosque has, at times, selected teams with no orthodox forwards.

As four of the eight goals they have scored in Poland and Ukraine came against the Republic of Ireland, there is some evidence to back up the boring tag being put forward by critics, however, Xavi is not buying it.

"We are not bored," he said. "All our players know how to adapt and how we play.

"It is important that our fans can identify with our style. They enjoy it and we enjoy it.

"If people think it is boring that Spain always win, that is fantastic for us."

Indeed, Xavi feels the style of play has rescued his career.

In an era when the physical dominance of midfield areas seemed to be taking over, he would have found it difficult.

But, first with Barcelona, then with a previously under-performing national side, a system has been found that allowed the 32-year-old to confirm his status as one of the best players in the world.

"I feel very lucky," he said. "Some years ago football had gone in the direction of being more physical.

"We had slightly weaker, but more technical, players.

"That is what we tried to do with Spain and thankfully it worked out really well for everyone."