Italy captain Gianluigi Buffon has stuck the knife into English football by claiming the Premier League harms the national side.

Ahead of the Euro 2012 final against Spain, the World Cup-winning goalkeeper believes that the number of foreigners in the Premier League is stifling young English talent.

Manchester City, Chelsea and Arsenal in particular have been accused of favouring foreign stars over English youngsters and Buffon, 34, says the Premier League’s standing as the best in the world is a major factor in the country’s 46-year trophy drought. 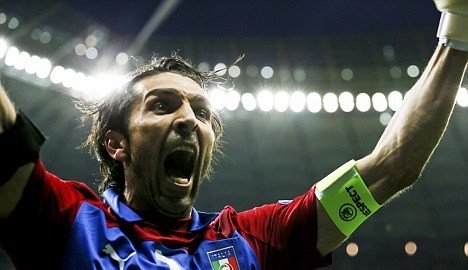 'Having a competitive league doesn't necessarily mean having competitive players,' he said.

'For a number of years now, the English league has had the best football and is the best league in terms of quality.

'The money that's in the game means they can go and buy anyone from all over Europe or the world.

'This can happen in Spain and Italy as well as England but the league in England is no longer very faithful to what the national side needs.

'With this footballing globalisation, it's very difficult. You struggle to have players from your own country playing in the top league.'