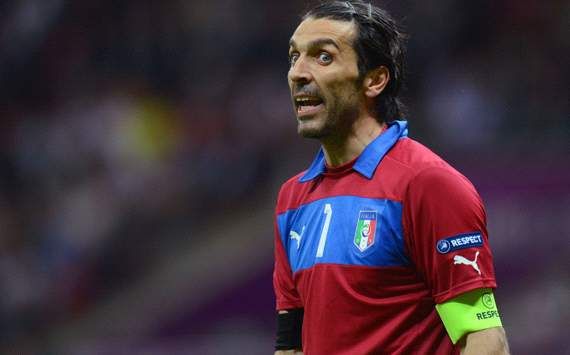 Gianluigi Buffon has revealed that he spent the night before Italy‘s semi-final win over Germany watching fans celebrate the Azzurri’s quarter-final victory over England on YouTube.

Cesare Prandelli’s side conquered the favoured Die Mannschaft 2-1 with two first-half goals from Mario Balotelli, before Mesut Ozil slotted home a late penalty to his give side a glimmer of hope.

And Buffon has confessed that, instead of doing the required homework ahead of the crucial clash, he actually spent the previous night watching videos of Italy’s celebrating fans.

Buffon revealed to reporters: “Last night I didn't sleep but not to study the German strikers but to see on YouTube the videos of Italian fans celebrating after we won against England in the quarter-finals.”

However, the Juventus goalkeeper was not entirely pleased with the win however, and accused the team of being wasteful in front of goal.

“I was upset because we missed too many chances and we risked draw in a match we should have won easily,” he added.

Italy will face Spain in the Euro 2012 final on Sunday in a repeat of their opening match of the tournament which finished 1-1.

The Italians remain the only team to have scored against La Roja in this European Championship.