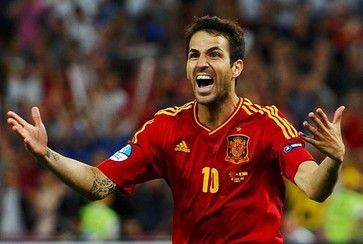 SPOT ON AGAIN ... Fabregas shows his passion after slotting shootout winner against Portugal

CESC FABREGAS knows tomorrow’s Euro 2012 final against Italy means much more for Spain than the chance to complete a history-making Treble.

Beat Italy and boss Vicente Del Bosque’s men will be rightfully acknowledged as the greatest team of ALL TIME.

They have stolen the hearts of millions of fans across the globe with their brand of awe-inspiring passing football over the last four years.

Many have already dubbed them the ‘best team ever’ but a win here will end the debate.

Finally, after decades of pain in Spain, they shook off the tag of perennial underachievers and went on to win the tournament before also lifting the World Cup two years later.

On Wednesday, Fabregas again slotted the winning penalty, this time against Portugal in the semi-finals, to give Spain the opportunity of an unprecedented Treble. History has come full circle for the Barcelona ace.

His eyes lit up yesterday as he admitted Spain’s date with Italy goes beyond records.

Fabregas insisted: “We have already made history, this is about much more. Our whole country is here with us in spirit, it’s a great motivation.”

The frontman made a special request to take Spain’s last spot-kick against Portugal just as he had done against Italy four years ago.

He explained: “I wanted to take the last penalty because the memory I had from the Italy game four years ago was great.

“I had the intuition. Because of the confidence I had, I believed I could do the same thing just like against Italy.”

Manchester City ace Balotelli finally came alive against Germany in the semi-finals as he blasted home a bullet header and a missile into the top corner to take the Azzuri through.

Hothead Balotelli will be Italy’s main threat and has boasted he wants to slam four past the Spaniards.

But Fabregas is ready. He said: “If we deactivate their offensive threat, we will have a big chance.

“Balotelli is a great player. He had two moments and scored two fantastic goals against one of the great powers of world football like Germany.

“The way he scored the second goal smashing it into the top corner from outside the box shows he is a crack player. He will be a big threat as will Cassano.”

If boss Del Bosque’s men are to fulfil their destiny and confound their critics, Fabregas admitted one man will be key — his Barca team-mate Andres Iniesta. He explained: “Iniesta is the player we need to be leader of our attack. He exceeds himself in every game. He has had a difficult season with many injuries but has arrived here in great shape. He has the creativity few players have.

“We need him to take responsibility as he is our point of reference in attack.”

Millions of Spaniards have flooded the streets of cities up and down their country to witness every triumph of their beloved ‘Furia Roja’ in this tournament. And the members of the ‘Red Fury’ will draw inspiration and strength knowing their whole country will come to a standstill as the final kicks off tomorrow evening.

An estimated two million Spaniards lined the streets of Madrid to celebrate winning the World Cup two years ago.

At least as many did the same in 2008 when Spain ended 44 years of agony by winning a trophy for the first time since the 1964 Euros.

Fabregas said: “Luckily we have a football-mad country. Winning on penalties always means more but the people have gone on to the streets many times since the tournament started. They have supported us.

“Many have come here to support us despite the difficulties they face. It’s a huge satisfaction to feel our country is here. We hope we won’t leave them disappointed but that we will give them another huge cause to celebrate on Monday in Madrid.

“The memory of so many coming to celebrate with us, the emotion and the pride and joy we felt by giving moments of happiness to our people, these are the feelings we want to relive. And tthey will be a source of inspiration for us against Italy.”