Cesc Fabregas has warned his Spanish team-mates about the threat of Italy's star striker Mario Balotelli ahead of the Euro 2012 final.

The Manchester City man scored two superb goals to dispatch Germany on Thursday night as the Azzurri made it through to Sunday's showdown by winning 2-1.

Fabregas' comments are no surprise given the threat that Balotelli - joint top of the list of golden boot candidates - poses. 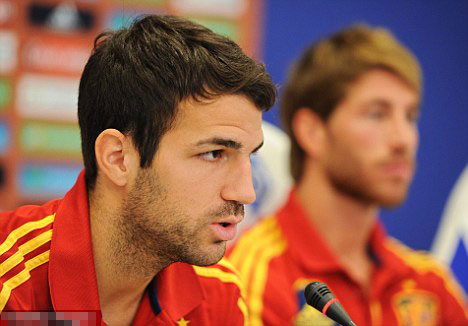 Wary: Cesc Fabregas knows the volatile Mario Balotelli could be a key player against Spain

'He showed that yesterday by scoring two superb goals in a semi-final against a very strong team like Germany.

But Fabregas knows the threat to Spain's attempt to win three major international titles running comes from more than just the entertaining frontman.

'They have a very competitive team,' he explained.

'They are very experienced at the back and up front, and they have players who had excellent seasons for teams like AC Milan, Inter Milan and Juventus.