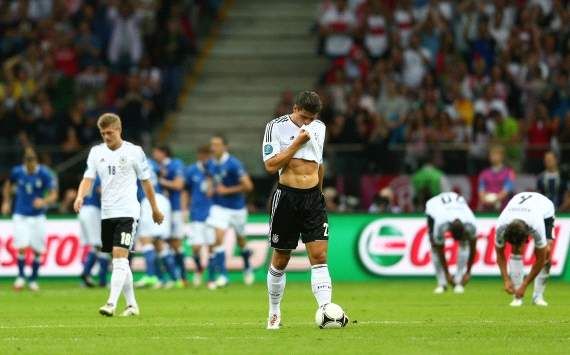 After an impressive handling of the Group of Death and a convincing performance in the quarter-finals against Greece, Germany were touted as favorites to go all the way and claim their first international trophy since 1996. But Joachim Low outsmarted himself against Italy with his debatable team selection and formation, and in the end Germany were the makers of their own downfall as Italy won 2-1 in Warsaw.

Low did everything to conceal his starting line-up before the match and prevent another leak following the premature release of his squad changes against Greece. What Germany fielded then came as a surprise to many. Mario Gomez and Lukas Podolski were recalled to the starting XI, while the insertion of Kroos was perhaps the biggest shock of all.

It was clear that Low wanted to match Italy’s strong central midfield with one of his own, switching from his usual 4-2-3-1 to the more compact 4-3-3. Theoretically, including Kroos against a team that play with four central midfielders made sense but Germany failed to compensate in other areas.

For the most part, die Mannschaft did well to diminish Andrea Pirlo’s impact but with Podolski and Gomez, Germany completely deprived themselves of their usual attacking edge and allowed their opponents to completely get into their heads. Gomez struggled to hold up the ball effectively and was double-teamed by Andrea Barzagli and Leonardo Bonucci, managing a match-low 14 touches in his 45 minutes on the pitch. Podolski’s lack of movement and poor first touch, meanwhile, never really materialised into cohesive attacks. As a result, Germany never took advantage of Italy’s lack of width as every attack broke down.

More worrying perhaps is the team’s own mental fragility, which has been a reoccurring theme at international level. The Azzurri pressed Germany well, especially high up the pitch, and after a bright opening 15 minutes for Low’s team, the nerves started to show. Manuel Neuer misplaced more passes than any other player on the pitch, something that almost never happens to Germany, and it made it difficult for his team-mates to build from the back. Both of Italy’s goals were avoidable and a result of lapses in concentration by the defence. All the while, 18 per cent of their passes did not connect, their worst total at the tournament and indicative of their inability to play their usually composed game.

The introduction of Miroslav Klose and Marco Reus in the second half made Germany’s attack more cohesive and dangerous, but by then it was too late. No side in the Euros had ever recovered from 2-0 down at the interval since (West) Germany themselves did it in 1976 against Yugoslavia, but the pressure to chase the lead and their own vulnerability on the counterattack made it next to impossible.

Low’s trust in Podolski has come at the ultimate cost and will no doubt be heavily scrutinised, especially considering Reus’ marked improvement in the second half. So too will his decision to start Gomez, but the most glaring issue of all was how easily the German players were fazed under pressure, not only by Italy’s pressure but by the occasion itself. It was comparable to how Bayern Munich froze in the Champions League final on home soil against Chelsea.

Germany may be the youngest team of the tournament but most of the players have been at this stage or similar before. In 2006 they were transitioning from one generation to the next. Two years later they overachieved and were deserved runners-up to the ascendant Spanish. In 2010 a bold young team made their debut on the international stage with much promise for the future.

In a tournament where they finally seemed ripe to go all the way, this exit is perhaps the most bitter of all. While Italy deserve their fair share of credit for a fantastic performance it is easy to argue that Germany fell on their own sword.