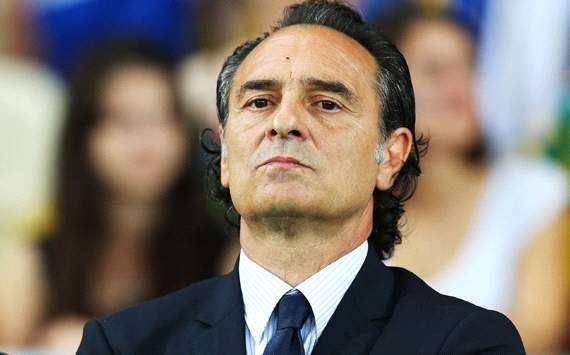 Italy head coach Cesare Prandelli has underlined that his side are underdogs for Sunday's Euro 2012 final against Spain despite beating Germany 2-1 in Thursday's semi-final.

A late penalty from Mesut Ozil was not enough to deny Italy a place in the showpiece decider after the Azzurri had taken the lead in the first half with two goals from Mario Balotelli.

After the match, Prandelli hailed his team's display, and despite watching his side eliminate one of the heavy favourites for the tournament, he has tipped Spain to retain their European crown.

"In the last 15 minutes, we wasted so many opportunities to make it 3-0, then our players had nothing left and we were forced to defend in the area," Prandelli told Rai Sport.

"We showed on the field everything we had prepared.

"Spain? They are clearly the favourites in terms of experience and quality, but we will be there to fight.

"We showed today just how much we respect and honour this shirt."

Goalkeeper Gianluigi Buffon, however was not happy, despite the victory, accusing his side of being sloppy particularly in front of goal.

“I was upset because we missed too many chances and we risked draw in a match we should have won easily,” he said..

“Last night I didn't sleep but not to study the German strikers but to see on YouTube the videos of Italian fans celebrating after we won against England in the quarter-finals."

Meanwhile, defender Giorgio Chiellini was thankful to the Italian medical team for helping him recover from a hamstring injury in time to feature in the semi-final clash.

He told reporters: “To be honest, 10 days ago it was just a dream to be here and I must thank the medical staff for getting me back so quickly.

“My muscle injury is a lot better but the whole body was quite tired. I really gave it my all and I hope my contribution was useful to the side in terms of my physical effort. I will definitely be fine for Sunday."

And the Juventus stopper is already targeting victory in the final, saying: “We are certainly living a dream and with us millions of Italians.

"We want to keep dreaming and make it come true on Sunday. We will enjoy this victory for a few more minutes, but then our thoughts go to the final.

"We know Spain very well because we have already played them before in the group. We know they are the big favourites for the competition but we really think we can beat them, just like to did to Germany tonight.

“We really hope to win the final and produce a terrific display in Kiev.”

His team-mate Alessandro Diamanti, who appeared as a late substitute against the Germans, also expressed delight with the victory and insisted the Italians do not fear Spain.

“I’m very happy to get in this final and it’s a special night for us. We have good preparation for the match, we’re very happy," he said.

“We can beat Spain but they are a very good team. They are the top team in Europe but we are going to do it and we’re not scared.”

The final on July 1 in Kiev will kick-off at 20:45CET. Spain and Italy drew 1-1 when they met in the opening Group C fixture.