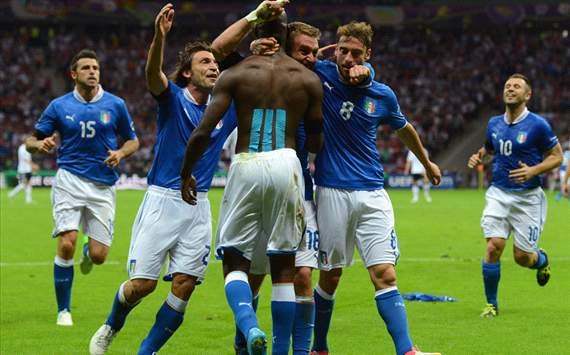 Italy will be eligible to take part in the 2013 Confederations Cup after successfully earning a place in the final of Euro 2012.

Fifa began running the tournament in 1997, initially staging it every two years until 2005 when the decision was made to change the schedule to every four years.

The competition now acts as a precursor to the World Cup and is competed for by the champions of each of the six separate Fifa confederations in addition to the World Cup holders and the host nation, in this case Brazil.

Spain, as world champions following their triumph in South Africa 2010, have qualified for the tournament regardless of the outcome of the Euro 2012 final. As a result, the Azzurri have been allocated the spot to represent the Uefa confederation even if they finish runners-up in Kiev in the European Championship decider.

Cesare Prandelli’s men secured their place in the final with a 2-1 victory over a much-fancied Germany side in Thursday's semi-final after two first half-strikes from Mario Balotelli.

Despite their qualification for the Confederations Cup in Brazil, Italy do have the option to reject the invitation. Both France and Germany have declined in the past.

In this scenario the two Euro 2012 semi-finalists, Portugal and Germany, will become candidates to represent Uefa.

Previous winners of the tournament include Mexico, France and current holders Brazil, who have won the competition a record three times.