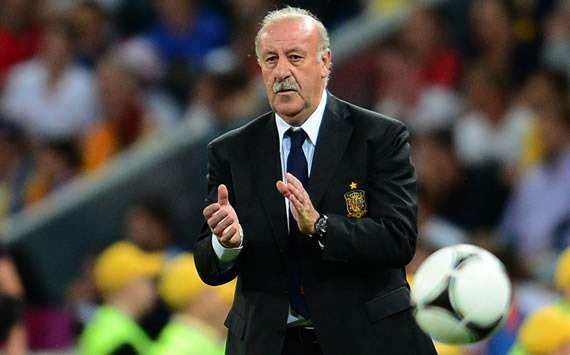 Spain head coach Vicente del Bosque has assured that he has no regrets for not sending Italy out at the group stage of Euro 2012 with a 'biscotto'.

Prior to the last round of group fixtures, there were fears that Spain and Croatia could arrange a 2-2 draw in their match - a result which would automatically knock the Italians out of the tournament.

However, La Roja won the game 1-0, which allowed the Azzurri to finish second in the group following a 2-0 victory over Republic of Ireland, and the two Group C rivals will now face off in the final of Euro 2012.

Ahead of the showdown on Sunday, Del Bosque insisted he will never regret passing the opportunity to arrange the score against Croatia - known as 'biscotto' in Italy.

"We will never regret not having done a biscotto, not having sent Italy out," Del Bosque told Onda Cero. "We did what we had to do.

"We will play with our weapons and we will keep our playing style, but I would say it will be a 50-50 game.

"We have two days to prepare for the match and between ourselves we will conclude what the best way to approach the final will be."

The group match between the two sides ended in a 1-1 draw, but Del Bosque stressed that he will not take too many conclusions from that game.

"I think Italy have found the perfect team," the 61-year-old explained. "They have been very strong with a four-man defensive line.

"I think they will use the same team and the system from the match against Germany. We will not be conditioned by the first game, and neither will they."

The coach then admitted that Spain may have performed below expectations in the tournament in Poland-Ukraine, but insisted that they deserve to be in the final.

"We have not been brilliant, but we have had control of all matches," he noted. "In yesterday's [Wednesday's] match against Portugal, the threat of Nani and Cristiano Ronaldo was nothing more than a threat.

"There has not been any negative episode. Tomorrow [Friday], we will get back to work to recover."