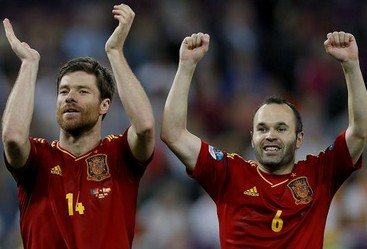 If Vicente del Bosque’s team lift the European Championship trophy, they will become the first team in history to win three major tournaments on the spin.

Superstar Iniesta, 28, delivered a monumental display against Portugal and netted his penalty in the shootout win.

He said: “We’re so happy to be in the final once again. We are prepared to make history.

Iniesta hailed defender Sergio Ramos whose ice-cool penalty mirrored that of Italy maestro Andrea Pirlo’s against England, as he dinked it straight down the middle.

He said: “He was very confident and full of certainty. It was a phenomenal feeling for us when it went in.”

Midfielder Cesc Fabregas revealed he spoke to his mother Nuria in an emotional phone call immediately after scoring the spot-kick that took the world champions through.

The Barcelona star demanded to take the last kick, telling Spanish assistant boss Jose Antonio Grande he wanted ‘the penalty that would give Spain victory’.

Fabregas said: “I spoke to my mother just after the match. These are special moments and the truth is, I felt very emotional.”

Fab, 25, has scored two goals in open play in the tournament but was again a sub in the semi.

He added: “I have already played for the national team for seven years now.

“I have had my ups and downs — but I really must be thankful.”