"We have beaten England, Argentina, Holland and Brazil. Now it is Italy's turn," said Bastian Schweinsteiger as he looked ahead to Germany's semi-final against the Azzurri in Warsaw. 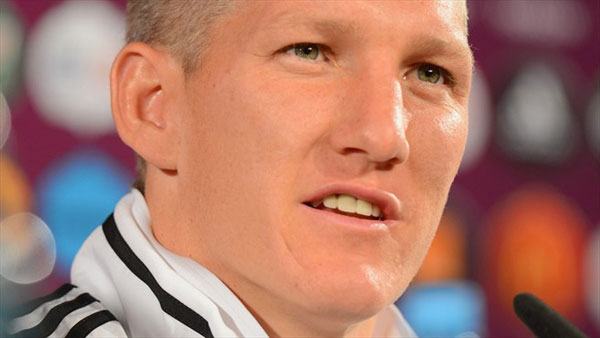 It has now been a little over five weeks since FC Bayern München lost the UEFA Champions League final in agonising fashion to Chelsea FC, but when you are a midfielder of Bastian Schweinsteiger's calibre – and when you are playing for the Germany national team – you do not have to wait long for your next career highlight. The tears of Munich have been wiped away, and Thursday's UEFA EURO 2012 semi-final against Italy is in full focus.

"I have played a lot of matches this season, but facing Italy in this classic fixture is still a highlight of the season," said Schweinsteiger at the National Stadium Warsaw. "I have the feeling that the time has come to beat the next big nation. We have beaten England, Argentina, Holland and Brazil and now it is Italy's turn."

Confident words, even though Germany have never beaten Italy in a competitive match. Schweinsteiger should know, having been on the pitch in Dortmund in 2006 when two late goals saw Italy through to the FIFA World Cup final. However, he feels, it will be a different animal taking on the Azzurri on Thursday: "Since 2005 we have been on a constant upward curve. It is important that there is a philosophy and to follow that. We can all be happy to have such a good and successful national team. Of course, the culmination [a title] is still missing, but we are getting closer and closer."

The 27-year-old also had to address concerns about his fitness, following his admission in an interview that he was still struggling with an old ankle injury. "I am 100% fit. That interview was done a day after the [Greece quarter-final] match and it was not ideal back then. But I have been able to train twice and I'm very much looking forward to this match."

Not just the match, but the confrontation with Andrea Pirlo, a player lauded for his role in  Juventus's recent Scudetto triumph and Italy's run to the semi-finals. "Italy are a big nation," he said. "They have won a lot and improved a lot in the past two years. They have many good players, but I like Pirlo best; it is fantastic watching him play. But there are ways to stop him, too."

While coach Joachim Löw has declared that Germany will not man-mark Pirlo, Schweinsteiger and midfield partner Sami Khedira will be responsible for keeping the Italian subdued. "Sami is leaving a great impression here. His experiences at [Real] Madrid have made him a much stronger player. He is making attacking runs, and scoring, but he's there to help defend too," Schweinsteiger continued.

"It must never be that we both rush forward and leave nobody to defend. The centre must always be shut down. We are both aware of that and can totally rely on one another." They have performed those duties admirably so far, and if they manage to do so on Thursday, they may have gone a long way towards stopping Pirlo and consequently Italy.