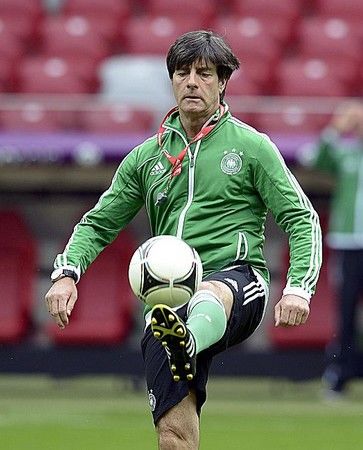 IT'S UNDER CONTROL ... Joachim Low

JOACHIM LOW knows the secret of success is team work.

Germany’s boss does not just mean on the field, he is talking about behind the scenes, too.

And that is where German football puts the English game to shame.

Historically, the Premier League and FA have fought like cats in a sack over the interests of clubs versus country.

Meanwhile, in Germany they have been working for the common good for years.

Low, 52, has been part of the system since becoming Jurgen Klinsmann’s assistant in 2004 before taking over as manager after the 2006 World Cup.

He refuses to take sole credit for the emergence of this exciting side which tackles England’s conquerors Italy in the Euro 2012 semi-final tonight.

To Low, the co-operation between the clubs and the German FA, the DFB, is what has made it happen.

He said: “There are lots of people who are responsible. It’s a product in Germany of many institutions, the DFB, the clubs and so on. They’ve done a lot of work at the clubs in the youth development.

“They’re much better than 10 years ago when it was all about conditioning and strength. Now it’s more technical.

“Our philosophy with the national team is embedded in the players and the football we want to play.

“We look for players who can fit into this culture and adapt and the players we have can play at this high level.”

Wolfgang Niersbach, the general secretary of the DFB, said: “The relationship between the DFB and the league is very close. There are discussions but, in the end, we always make sure the right decisions are made for the German team.”

The DFB runs the game. They work with the German Football League and the national side is as important as the league.

No one can own more than 49 per cent of a club, meaning the interests of German football comes first over self-interest.

After the disastrous showing at Euro 2000, where they crashed out at the group stage, Germany embarked on a radical re-think of their youth structure.

All the academies of the 36 clubs in the top two divisions had to have at least 12 players in each yearly intake who were eligible to play for Germany.

The result: more German talent coming through the system which is not being stifled by talented foreigners.

They have also worked hard to ensure the likes of Real Madrid midfield star Mesut Ozil, who is ethnically Turkish, chose to play for Germany, the country of his birth. Commendably, the English FA are trying to get to grips with the game’s grassroots to make the players of the future more technically proficient.

They are changing kids’ football to small-sided games with small goals — just as the Germans did 12 years ago.

And they are also opening the new National Coaching Centre in Burton this September with the brief to develop coaches of the future.

It is a long-term plan but it remains to be seen whether the clubs embrace it.

And if manager Roy Hodgson persists with his 4-4-2 philosophy and launching balls into the big men up front, the message will become extremely blurred.

The Germans are once again in the last four of a major tournament, while England’s so-called ‘stars’ are off on their holidays. The Premier League clubs will not care.

They have just signed a new TV deal worth £3BILLION and the wealthier it gets, the more it will be calling the shots.

Money talks and, if the England team suffers, so what?

Yet the Germans have shown how clubs and the national team can both be strong.

Bayern Munich got to the Champions League final, albeit losing to Chelsea on penalties, and the country marches on at Euro 2012 with its confidence high.

Low said: “We will try to dictate our own rhythm and we won’t let Italy show us how we have to play.

“We have to be cheeky, strong and brave. We have to concentrate and work very hard but we know our strengths.

“I don’t think we have to worry too much about our opponents. We play our own game, impose our own ideas — that’s the most important thing. It is a process that has happened over a few years. You have to form a team who play well together, who are very good in the way they play together and who are capable of working well in all their different various positions.

“We want to show other nations that we are at the same level as them in the way we play football — and we’ve been successful doing that.

“We are a team that doesn’t have to react to our opponents. We play our own game, form our own way of playing.

“A few years ago those were things we had to work on.

“At this moment, we’re at a level of football where we don’t need to hide from anyone.”

Bayern’s Bastian Schweinsteiger, who missed a penalty in the Champions League shootout against Chelsea, does not seem to be suffering much from the experience.

The midfielder said: “I can’t compare this game with that final. That happened and this is something completely different.

“For us, it’s important the standard keeps improving. You have a philosophy and you stick to it.

“Since 2005 we’ve been going up and up. We can be happy that we have such a good national team which has been successful.

“Of course, we don’t have the crown yet but we’re getting closer and closer.”

You wonder how long it will be before England will talk in such optimistic terms.