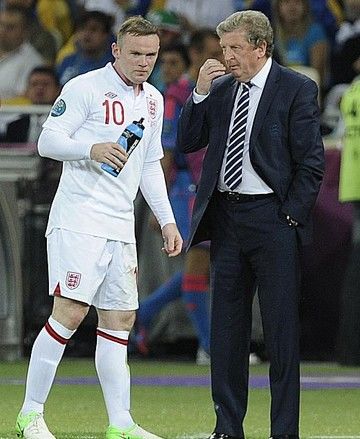 LOUD AND CLEAR ... Hodgson gets his message through to Roo

But Hodgson has come out fighting for the Manchester United star — insisting England had to STOP him working so hard at Euro 2012.

Hodgson said: “Capello is entitled to his opinions, I suppose.

“I don’t know what relationship he would have had with Wayne but I always think it’s a bit cheap to kid on a player who was so anxious to do well.

“His attitude at Euro 2012 was magnificent.

“He was putting in extra work in training because he was concerned he was behind the others having missed the first two games through suspension.

“He was trying to do extra work and we were trying to put the brakes on. His desire to do well was enormous.”

Rooney was panned for his performance during England’s quarter-final defeat to Italy.

But Hodgson says the star striker cannot carry the can by himself.

The England boss added: “In the final game against Italy he, along with one or two other players, didn’t play to the level he can but that’s what football is about.

“If every player was a robot and played at the same level in every game then football would be a very simple game and we wouldn’t need coaches.”

England have come under fire for a lack of ambition that saw them desperately cling on and play for penalties.

But Hodgson told talkSPORT: “There was a brief period in the first half when we showed what we could do but we couldn’t keep that up.

“Getting to penalties was the best we could do.

“There was no surrender. It was a great effort and I feel very proud of what the players did for me in the pitch.

“But there will always be recriminations if you don’t get as far as you’d like, and achieve what you want to.”