Roy Hodgson has gone to war with Fabio Capello, accusing his predecessor as England manager of taking a 'cheap' shot at Wayne Rooney.

Capello and Rooney have been embroiled in a public spat since the striker suggested things had improved significantly now the national team had a coach the players could understand.

The Italian never mastered English but he responded by saying Rooney does not speak English either and then suggested, after seeing the striker play so poorly at Euro 2012, that he only  performs for Manchester United because Sir Alex Ferguson’s ‘Scottish’ is the one language he understands. 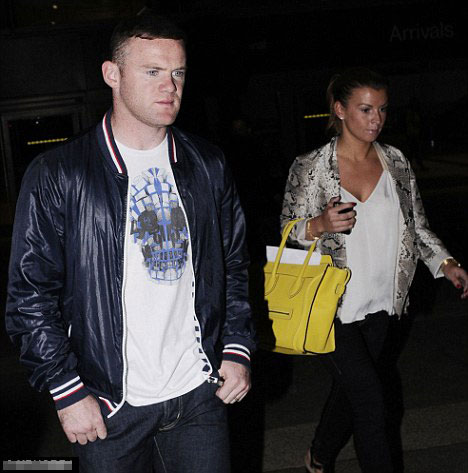 Getting away from it all: Wayne Rooney and wife Coleen arrive in LA for a break

On Wednesday, Hodgson responded on behalf of his star player on talkSPORT. ‘Capello is entitled to his opinions, I suppose, but I always think it’s a bit cheap to kid on a player who was so anxious to do well,’ he said.

Hodgson went on to defend Rooney against accusations that he had  fitness issues in Ukraine — despite the player’s apparent lack of condition after missing a month of football and, more controversially, taking a pre-tournament trip to Las Vegas. ‘His (Rooney’s) attitude was magnificent,’ said Hodgson.