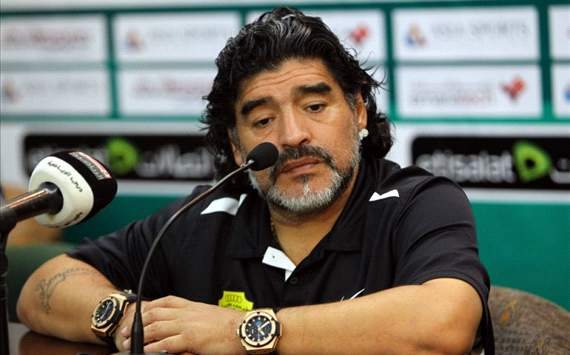 \Diego Maradona believes that Portugal have Cristiano Ronaldo to thank for their progress to the Euro 2012 semi-final, and the Real Madrid star deserves a monument in his honour in Lisbon.

The 27-year-old had been widely accused of under-performing at international level in the past, but came to life in Ukraine and Poland, leading his side's charge to the last four with three goals in four games.

And Maradona believes that the former Manchester United winger deserves to be given more credit for his performances for the Seleccao.

"Cristiano Ronaldo had been struggling with performance at a national level for years," he wrote in his column for Times of India.

"The world's best player, along with Lionel Messi, seemed frustrated and petulant when playing for Portugal. Luckily for him, Portuguese coach [Paulo] Bento also could bring in world class Pepe in defence, Chelsea's [Raul] Meireles in midfield, and Manchester United's Nani, giving him free range up front.

"After a superb couple of games, Ronaldo started playing - scoring three goals and bringing Portugal to an unexpected semi-final. It is always great to see the best in a superstar.

"He has shown his countrymen that he does deserve a monument in Lisbon."

Portugal will compete with Spain for a place in the final, and Maradona went on to urge Bento's side to take the game to the world champions, and not to defend.

"Stay only in defence and the Spanish will kill you," he continued. "Attack them like the Italians did in their first game, and you may get an upset.

"The Spanish have played their ball possession game, risking a loss against Italy and Croatia, but generally showing that they have the best midfield, with their Barcelona superstars Xavi, [Andres] Iniesta and [Sergio] Busquets.

"Although not as sharp as [in the 2010 World Cup] in South Africa, Spain continue to dominate their games with irritating ease."

In the competition's other semi-final, Germany lock horns with Italy, and Maradona feels Joachim Low's men have a rare opportunity to inflict a loss on the Azzurri, but warned them to not underestimate their opponents.

"Germany's young superstars [Mesut] Ozil, [Sami] Khedira and [Thomas] Muller have matured over these years and it shows," he continued.

"Their young midfield and ease of scoring make them the favourites to win the tournament, although they must face their bete noir Italy in the semi-finals.

"If they ever have a chance to change their luck versus the Azzurri, this is it. [But] Germany will do well not to underestimate them.

Thursday's semi-final between Italy and Germany will kick-off in Warsaw at 20:45CET.