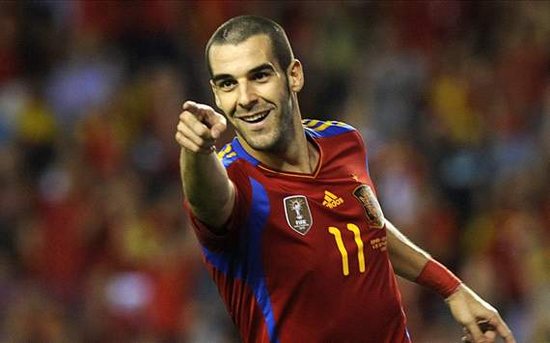 Alvaro Negredo has revealed that Spain have no set plan for nullifying Cristiano Ronaldo and are confident that Iker Casillas will be up to the task of keeping out whatever the Portugal forward fires his way in Wednesday's Euro 2012 semi-final showdown.

La Roja are very familiar with the Seleccao's star player, given he plies his trade in La Liga with Real Madrid. However, Negredo has explained that Vicente del Bosque has not come up with any special tactic for negating the threat posed by the 27-year-old.

"In football, everyone knows Cristiano Ronaldo and that he is a player overflowing with quality," the Sevilla striker told reporters at a press conference on Tuesday.

"We have no plan to stop him, but we know that he is a good free-kick taker and that requires you not to give away any silly fouls.

"But we have the best goalkeeper in the world, who knows him well and knows how to stop him."

Negredo is more concerned with how Spain will go about breaking down one of the best defensive partnerships at Euro 2012.

"Pepe and Bruno Alves are great centre-backs," the forward conceded. "Pepe is aggressive and strong and fast. I know him as he plays in Spain. He's one of the best centre-backs in the world.

"Bruno Alves is very strong and powerful in the air, and the two make a great defensive duo."

Spain's meeting with Portugal in Donetsk will kick off at 20:45CET.