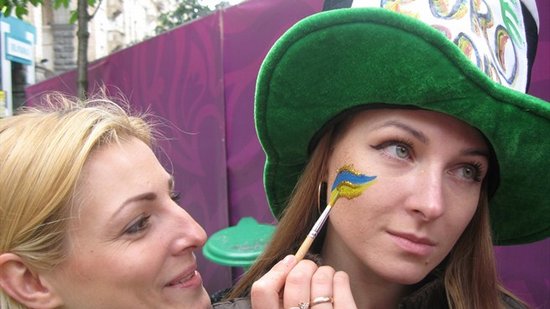 A Ukraine supporter takes on a new look

Away from the on-field action at UEFA EURO 2012 there is another competition taking place – among supporters.

It is impossible to convey in words the incredible variety of costumes and accessories fans wear in order to stand out from their contemporaries at a celebration of football such as this. While some play safe and don the shirt of their national team, others dress up, say, as a Greek warrior; other visitors to the Kyiv fan zone have indulged in body art to show their devotion to the cause.

One of several artists on hand with paint and brush is Tetiana, whose love of the game and desire to meet new people meant she simply had to set up her pitch on Khreshchatyk, the street in Kyiv where the fan zone is situated. "I'm a passionate fan," she told UEFA.com. "I live in Zhytomyr and travel to Kyiv on matchdays.

"All my life I've been drawing pictures at home for my own pleasure, but here is a great opportunity to practise and meet interesting people. My husband and father are also a big football fans. They supported me in this venture – that's why I'm here."

Tetiana was pleasantly surprised at the number of people looking for a makeover when she first set out her stall. "I didn't expect such a rush," she said. "Big queues were forming; everybody wanted to stand out somehow. I use a special paint that glistens in the dark, so if paintings look impressive by daylight, in the evening they become even more distinct."

What have supporters been requesting? "Usually fans asked for a different interpretation of their country's flag. Even after Ukraine's elimination, local fans are still asking for a national symbol painted on their bodies. But most of all, I remember one Swedish fan – we started on his abdomen and ended at his face. It tickled him when the brush was touching his stomach."