The Mannschaft playmaker has stated that most people are expecting La Roja to win the tournament, but Joachim Low's side are only focusing on their semi-final against Italy 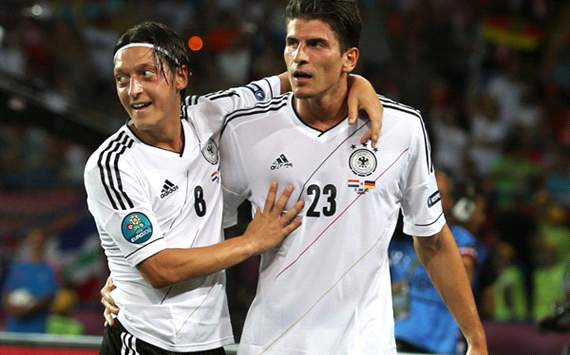 Germany playmaker Mesut Ozil has stated that Spain are the favourites to win Euro 2012, but for now his side are focusing on the semi-final against Italy.

Die Mannschaft stormed into the last four, negotiating the 'group of death', which also included the likes of Netherlands and Portugal.

And the Real Madrid midfielder feels that his side have no reason to fear anyone, and have earned the respect of every team remaining in the competition.

"I saw Spain's match against France," he told reporters. "They are the biggest favourites. They dominated the entire match. But now we are focused on facing Italy.

"I do not care if we play against Spain or Portugal.

"Against Greece, the team supported me so that I could show my true potential. Now we are waiting for Italy. They are very strong and they deserve to be in the semi-finals. I did not have any problem to perform in the group games. Even the experts were satisfied.

"We showed how strong we are in all areas of the team. I think that every other side respect us.

"The past does not matter. The other teams have great respect for us. Our goal is to bring the European title back to Germany. We are here for this. We can beat Italy and we want the title.

"Andrea Pirlo is a world-class player, Mario Balotelli is a great striker. But we do not think of the individual adversaries. Italy are a very compact team, but we can beat them."