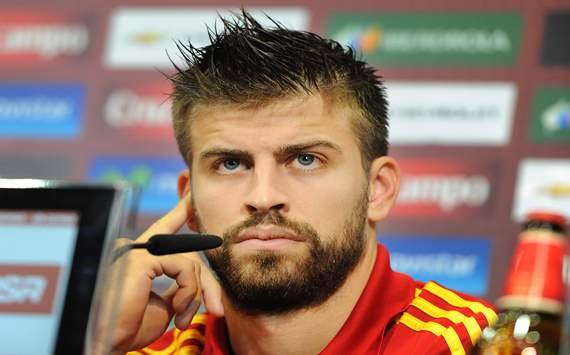 Spain defender Gerard Pique has revealed that he has a good relationship with Portugal star Cristiano Ronaldo as the duo prepare to face off in Wednesday's Euro 2012 semi-final clash.

The 27-year-old attacker is regarded as the biggest threat to Iker Casillas' goal as the Seleccao look to reach their second final at a European Championship in eight years.

Tension has run high in recent club matches between Real Madrid and Barcelona, but Pique insisted that his relationship with Ronaldo has not been damaged by the rivalry between the two clubs.

"We played together at Manchester United for two or three years," Pique is quoted by AS as saying. "Neither of us spoke English that well, so we were very close. We have always had a good rapport.

"It is always special to meet players of this quality. The first match did not go his way, but it is always hard to play against him.

"You cannot allow him to have any space. There won't be a favourite for this match."

Spain will have two days fewer than Portugal to prepare for the semi-final contest, but Pique is confident that fatigue will not play a role against the Euro 2004 runners-up.

"Do not worry, we are not as exhausted as it seems," the 25-year-old defender added. "At the end of the match against France, we were trying to have control of the match, it was not like we were exhausted.

"We spent the day very calm in our hotel rooms. We went to bed at five in the morning, so we slept almost the entire day and then we saw the match between England and Italy."