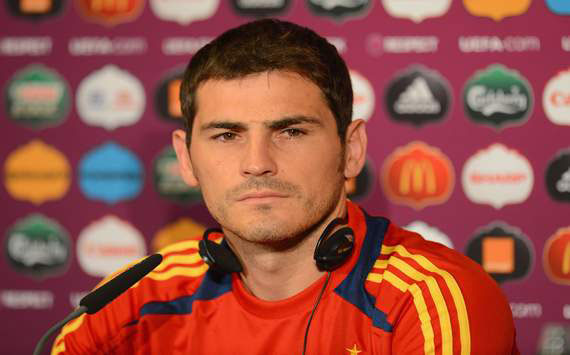 Iker Casillas is confident that Spain will be able to cope with Portugal and Cristiano Ronaldo without the absent Carles Puyol at the heart of the defence in Wednesday's Euro 2012 semi-final encounter.

The European and world champions were dealt a huge blow prior to the tournament as the Barcelona defender was ruled out of the finals after undergoing surgery on a knee problem.

Despite missing their most experienced defender, Spain have conceded only once so far in four matches at the Euros, and Casillas believes that Gerard Pique will be able to restrict the attacking threat of Ronaldo having had plenty of experience at club level.

The 31-year-old custodian then spoke about the changes he has witnessed in La Roja in the 12 years in which he has worn the national team's shirt.

"When I arrived, my role was different," he explained. "I was looking, listening, learning ...

"Now I am one of the most experienced players. I have shared the dressing room with Spanish legends, but you also learn with the youngsters, who arrived with their future ahead of them.

"I prefer to be remembered by my character than by the titles I have won."

Casillas also looked back at Euro 2008 and admitted that the way Spain are perceived has considerably changed in the last four years.

"In 2008, we arrived at the Euros in a completely different way," the Real Madrid goalkeeper explained.

"It was said that we were amongst the favourites, but not that we could win the title.

"Back then, drawing with Italy was something phenomenal, while nowadays it seems like a defeat."

Spain are tipped as favourites for the match against Portugal, but Casillas stressed that he is taking nothing for granted against the Seleccao.

"We have the experience of some painful defeats when we did not deserved to lose," the Spaniard noted.

"Every match is different and sometimes the ball will not go in, and you find yourself on the back foot with one simple action. We must play our game."

Spain's semi-final showdown with Portugal on Wednesday kicks off at 20:45CET.