She was there to cheer on her footballer beau as he and his Spanish teammates romped to victory over Croatia and the Republic of Ireland.

But Shakira is not a woman to drop her life for her man and it was back to business for the singer today - even though it meant missing Gerard Pique's Euro 2012 quarter-final.

The Colombian pop star was snapped in Barcelona in Spain yesterday filming her new music video and looked absolutely sensational in a long gold dress as she sang down from a balcony. 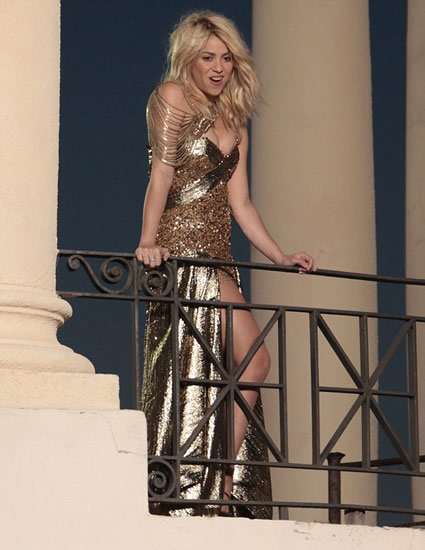 Golden girl: Pop star Shakira looked sensational in her glittering frock as she filmed her new video in Barcelona

She was later seen being driven away back to her hotel or maybe Pique's home in the Catalan city and may have been in a hurry to catch some of the game.

Because hundreds of miles away in Donetsk in the Ukraine, Pique and the Spain national side were securing their place in the semi-finals after a 2-0 win over France.