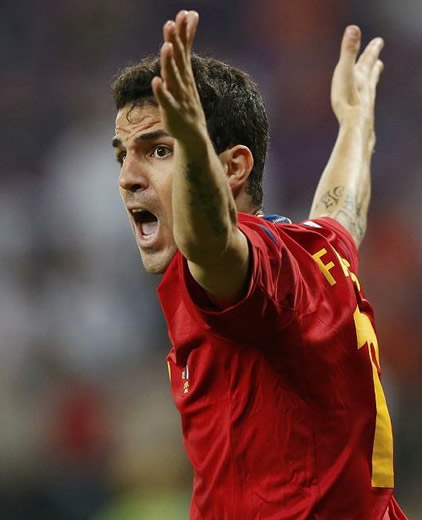 There is a hefty sprinkling of Real Madrid in Iker Casillas, Alvaro Arbeloa, Sergio Ramos and Xabi Alonso, but still Spain is much more Pep Guardiola than Jose Mourinho.

Fabregas said: “Portugal is one of the strongest teams. They defend well and are lethal on the counter. They’re similar to Real Madrid and we must be at the top of our game.

“You can liken and compare it to Real Madrid–Barcelona in terms of the respective styles of the teams.

“But there are different players and we also have players from many teams so it’ll not be the same.”

Spain outclassed France to end 28 years of hurt against Les Bleus and stay on course for a historic three major tournament triumphs on the spin. Until Saturday, Spain counted five losses and one draw in competitive matches against France.

Fabregas was astounded as Spanish celebrations for their first-ever win against the French were subdued.

Four years ago, at the same stage, they went bananas after he slotted the winning penalty against the Italians in a quarter-final shootout.

Fabregas said: “I thought at the end of the game that we were like ‘ok we won’.

“Four years ago, when we won in the quarter-finals, we were all together jumping up and down in the middle of the pitch celebrating.

“We were saluting the fans and our families, we felt the joy of a brutal success when we beat Italy. And now it seems like it was an obligation, something normal.

“But these are the wins that we have to evaluate the most inside us because they are so tough. We’ve won a Euro and a World Cup and now we’re already back in the semi-finals. It’s enormous.”