Russia were hit by yet another UEFA fine following further extremist behaviour by their fans at the European Championship.

The Football Union of Russia (RFS) were fined 35,000 euros (£28,207) for the conduct of their supporters during what proved to be the country's final match at the tournament against Greece last Saturday. 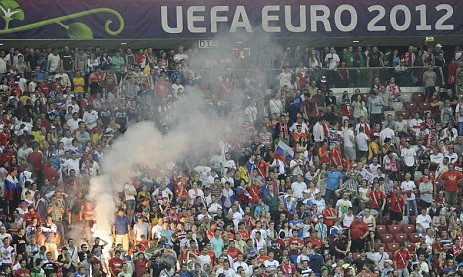 Flaring up: Russia fans light pyrotechnics after defeat to Greece

All Russia's games in Poland and Ukraine were marred by the displaying of 'illicit banners' and 'the setting off and throwing of fireworks by spectators', earning them a total fine of just under £150,000.

The sanctions heaped further embarrassment on Russia, who are under increasing pressure to deal with fan problems having been named hosts for the 2018 World Cup.