Tottenham will hope to talk to Laurent Blanc about the vacant manager’s post at White Hart Lane this week after France’s exit from Euro 2012 to Spain.

Although former Chelsea manager Andre Villas-Boas is on Tottenham’s shortlist and remains the bookmakers favourite to succeed Harry Redknapp, chairman Daniel Levy is keen to speak to 46-year-old Blanc, who has earned a good reputation in leading Bordeaux to the French league title and guided the national team through a difficult period following the players’ infamous training strike at the 2010 World Cup.

Tottenham’s progress in appointing a new manager has been slowed by Levy’s need to spend a lot of time in America for personal reasons. 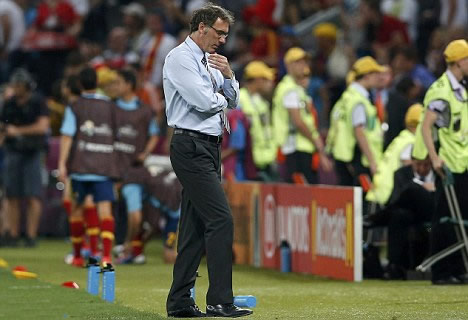 Plenty to ponder: Laurent Blanc could be heading to the Premier League

But he will hope to move the process forward this week with Blanc’s deal with the French Football Federation ending on Saturday night with a 2-0 defeat against the world champions in Donetsk.

A downbeat Blanc didn’t try to disguise a disappointing display, declaring: ‘The best sides will be in the semi-finals and France won’t be.’