Gianluigi Buffon believes Italy are good enough to beat England on Sunday night and be crowned champions - but says they might need to study law to do it!

The Italians arrived with a match-fixing and betting scandal in full swing back home. 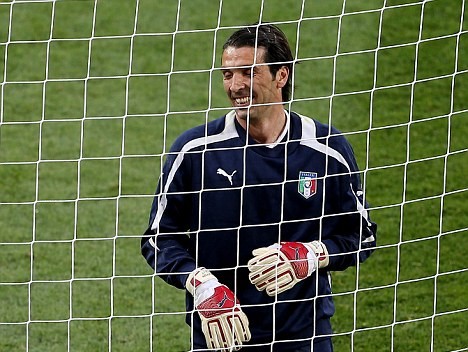 Police even turned up at their training base in Italy demanding to speak to players in the build-up to the tournament, and Domenico Criscito was dropped from the squad as a result.

A total of 19 players from all levels of the game have been arrested.

Italian Prime Minister Mario Monti and team manager Cesare Prandelli even offered to pull Italy out of the tournament to save face, but legendary keeper Buffon is now aiming to win it… providing the lawyers don't get involved, that is.

'We want to win the trophy,' he said. 'But maybe we need to start practising criminal law!

'This is where it starts. We are with the best eight teams in Europe and we know playing England won't be easy but we are ready.

'We are confident because of what we have already done here. Group C was the strongest.
I have a feeling that both ourselves and Spain are going to go a long way here; I wouldn't be surprised if we met again in the final.'