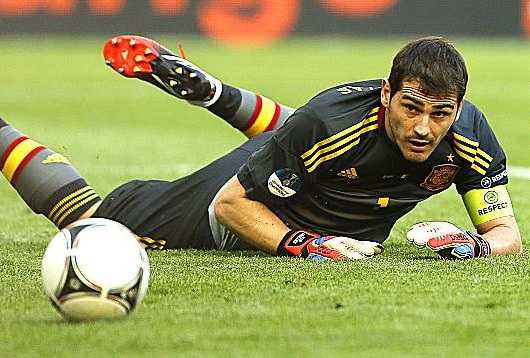 IKER CASILLAS insists Spain are ready to end a 28-year hoodoo and beat France for the FIRST time in a competitive match tonight.

Amazingly, the world and European champions have only beaten Les Bleus in friendlies — always losing when it really mattered.

They have suffered heartache five times: the Euro ’84 final — their first-ever tournament clash — twice in the Euro ’92 qualifiers, the quarter-finals of both Euro 2000 and the 2006 World Cup.

And the only time Spain managed a point was in the group stage of Euro ’96 in England.

Spain are determined to become the first team to win THREE major tournaments on the trot.

Keeper and captain Casillas has won the two friendlies he has played against France in recent years without conceding a goal.

But the 31-year-old said: “It will be very difficult because of how good France are — and not because we’ve never beaten them in an official match.

“Stats are there until the day when they are broken.

“We have won the Euros and the World Cup — something that for a long time was unthinkable.

“But it is true that to win the Euros, World Cup and Euros back to back — the treble — is something that’s not exactly an every-day thing.”

Casillas was an unused sub when eventual champs France dumped the Spaniards out of Euro 2000 at the quarter-final stage.

And the Real Madrid star was on the pitch in the 2006 World Cup when his much-fancied side once again crashed out against Les Bleus, who went on to reach the final.

That was Spain’s last defeat in the knockout stages of a major tournament.

And they have not lost a competitive match since their shock defeat by Switzerland in their opening match of the 2010 World Cup.

Vicente del Bosque’s side became the first team to win the trophy after losing their first match.

Casillas added: “Beating France will be very difficult. Nobody should think this match will be easy or that we’ll score loads. We will have to suffer to go through.”

The Spanish skipper, who will earn his 135th cap tonight, is hoping Real Madrid team-mate Karim Benzema will be off key along with Samir Nasri and Franck Ribery.

He added: “I am fortunate to share a dressing room with Benzema, but destiny wanted us to face off. He is such a great player — but I hope that he’s not at his best on the day.

“We will not discover now what type of players they are, but the best strike force in the world is ours. I hope Karim does not have a good day.”

Casillas conceded the bad blood between Barcelona and Real Madrid following a series of controversial Clasicos had affected Spain’s dressing room — but that harmony had now been restored.

He said: “We’ve recovered everything that we had before.

“Last year was very complicated, very hard. But this month has been tremendous. Now we are laughing at all the things we did.”