Expanding the European Championship to 24 teams won't spoil the tournament or dilute its quality but it will allow more major nations to take part, insists Euro 2012 director Martin Kallen.

After a group stage that went down to the wire in Poland and Ukraine, with favourites Spain and Germany only squeezing through at the last minute, the worry is the expanded version in France in four years' time will not be as closely contested.

UEFA president Michel Platini defended the decision to expand earlier this week and reporters pressed 2012 tournament director Kallen on the issue at a news conference on Friday. 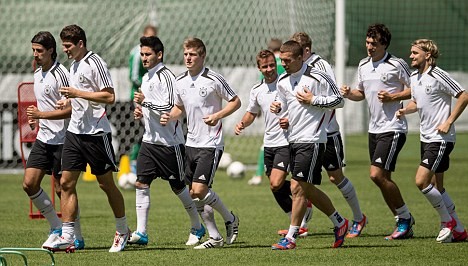 Favourites: But even Germany came close to elimination in the group stage

'At the moment we have the best teams here, but there are great teams who are not,' he said, listing Switzerland, Romania, Bulgaria, Lithuania, Slovenia and Norway as examples.

'The Scots are also not here - they bring a lot of emotions, a lot of atmosphere with them.
We need to see how 2016 will be. For sure this tournament will be more and more looked at because more nations can participate,' added Kallon.

He also batted back questions about empty seats at a number of games in Poland and Ukraine, where interest in the tournament has taken a battering by the elimination of both host nations at the group stage for the second tournament running.

Kallon said that all games played so far had been sold out and that any gaps in the stadiums were due to fans who had bought tickets not being able or choosing not to travel.

'If you have a team or both (host) teams which go to the quarter-finals of course that is better,' he said. 'Here the two hosts were very close to getting out of their groups - in Switzerland and Austria, they were a little bit less close. But from our side it is not a point where we will award the Euros to countries that will go the quarter-finals.'

He also said the economic crisis engulfing a number of nations whose teams are competing in this year's championship had clearly had an effect on the number of fans travelling.